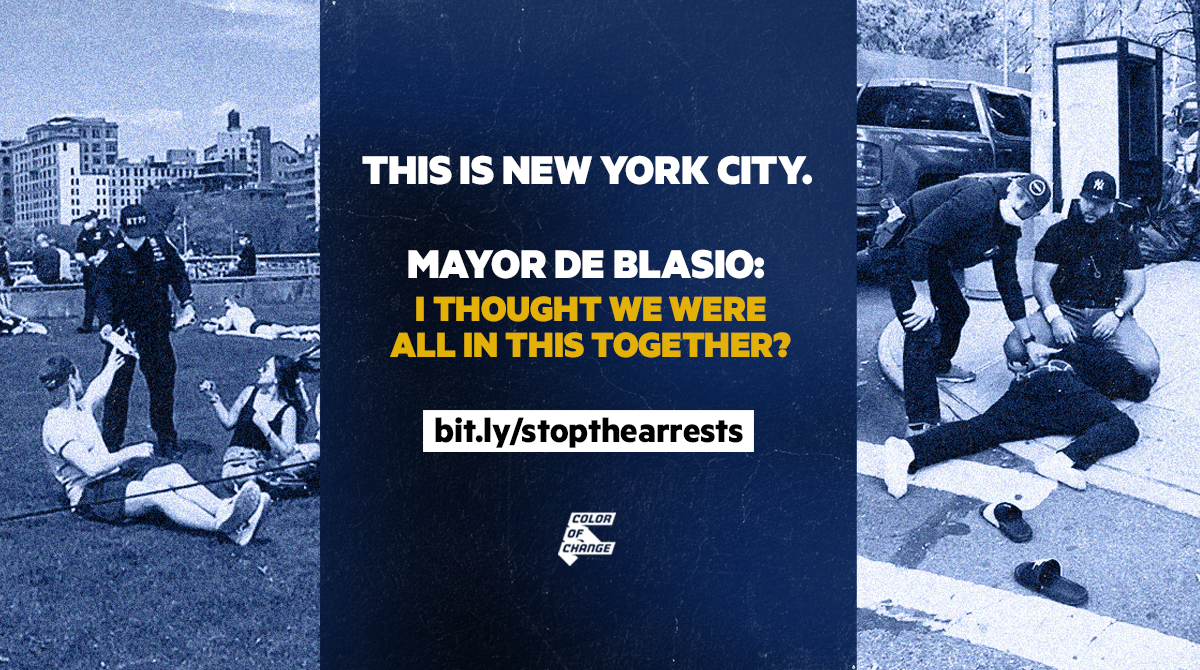 New York Governor Cuomo has announced his plan for opening indoor dining restaurants in NYC -- and he wants to unleash 4,000 NYPD officers in restaurants across the city to enforce social distancing orders. He has called on Speaker Corey Johnson to create a task force of officers to do "restaurant compliance."

We know how Black people will be targeted because it played out before our eyes a few months ago.

While Gov. Cuomo continues to call for more police funding and police presence in our communities, Black and Brown people in New York are disproportionately dying from COVID-19 with no assistance from the government. Some of the billions we continue to spend on the police, despite facing a budget deficit, should be diverted to widespread COVID-19 testing, free treatment, and PPE distribution. But yet, Gov. Cuomo continues to call for more policing of our communities.

We must call on Mayor de Blasio Speaker Corey Johnson to stop the formation of the special NYPD task force for indoor dining social distancing violations.

Read more below about how Mayor de Blasio weaponized his police force against Black people during the pandemic as well. Sign the petition to protect Black people in New York!

COVID-19 has had devastating impacts on Black communities across New York City. Not only are our communities dying at twice the rate of non-Black New Yorkers, but we’re also having to deal with over-policing at alarming rates.

The NYPD has a long history of racial profiling and aggression towards Black and Brown communities. In the Summer of 2013, a federal judge found the New York City Police Department’s “Stop-and-Frisk” policy unconstitutional. This was after a decade of community organizers, and victims of the practice, sounding the alarm on the racial profiling policy, which led to the criminalization of millions of Black and Brown New Yorkers. While the practice was deemed unconstitutional, we know the profiling never actually stopped. And yet in this time when our elected officials are calling for us to “be in this together,” it’s clear that Black people are systematically targeted by law enforcement throughout the city.

New York City needs to respond to this pandemic in a reasonable manner, led by public health experts, not by a racist police force. No one should be arrested or criminalized for “breaking” social distancing orders, or rather, existing outside while Black. Law enforcement and criminalization are NOT public health measures. Increased police presence in our communities has never made us safe, and during a global pandemic, they are literally the last thing we need. In fact, police officers themselves are vectors for the disease. More than 4,000 NYPD officers have contracted the virus. They come in contact with thousands of people each day, often without wearing masks or gloves, putting everyone they come in contact with at further risk of contracting the virus.

Even as we continue to demand defunding the police, Mayor de Blasio continues to pour millions of dollars into the already bloated NYPD budget. While he overfunds the police, tens of thousands of New Yorkers have contracted COVID-19 and died. Those millions of dollars being used to police our communities should be diverted toward investment in our communities, like widespread COVID-19 testing, PPE distribution, housing for the tens of thousands of unhoused New Yorkers, and jobs.

I am calling on you to stop the formation of the special NYPD task force for indoor dining social distancing violations, called for by Governor Cuomo.

I am alarmed by the statistic that 87% of people arrested in Brooklyn for social distancing violations were Black people. And this is only a small fraction of arrests made across all five boroughs. Black and Brown communities are already overpoliced and facing devastating consequences from the spread of the deadly virus. We must not continue to unleash police officers on Black communities as a form of public health precautions.

This is stop and frisk all over again. Black and Brown communities are in need of financial support, PPE, COVID-19 testing, and shouldn’t have to worry about the added burden of facing criminalization. We need medical professionals responding to the pandemic, not officers with guns.