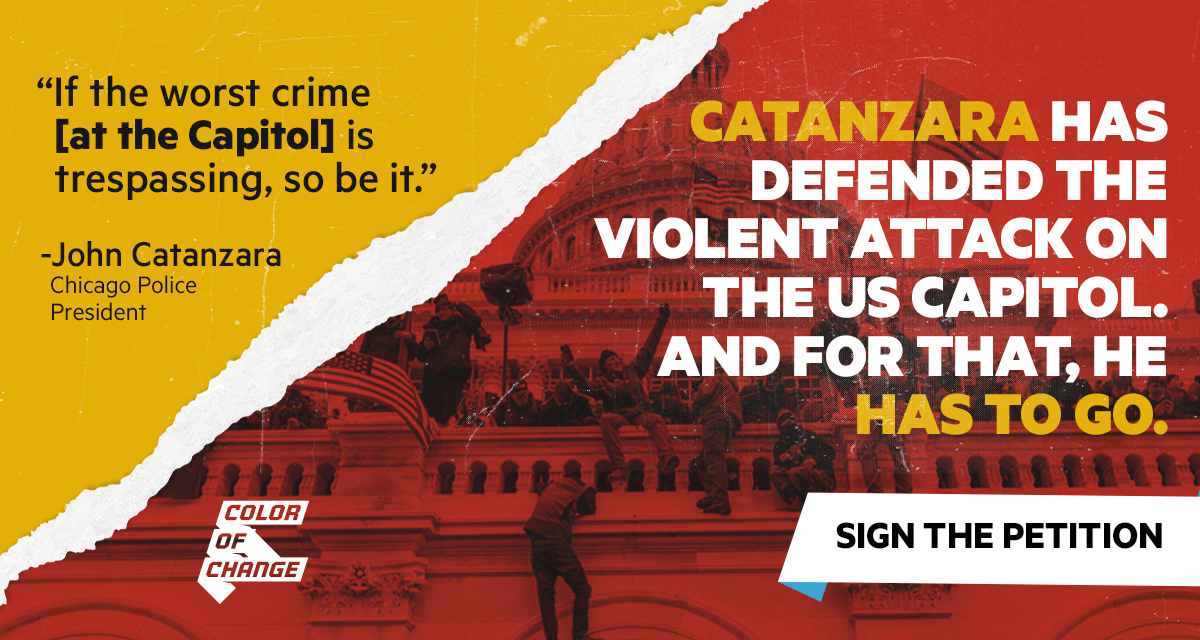 The violent attack on the U.S. Capitol by white supremacists—incited by Trump and his allies—was an attempt to violently overturn the results of the election. It left at least five people dead and threatened the lives of members of Congress, top government officials, Capitol police officers, and all Capitol employees. Rioters armed with guns, mace, handcuffs, and tactical gear entered the Capitol, looted offices, and almost reached areas where members of Congress and others were hiding.

Meanwhile, the president of Chicago’s FOP, John Catanzara is defending the rioters. He’s come out in support of their violent actions justifying and normalizing their attack on the Capitol — that claimed the lives of two Capitol Police officers — and downplaying the threat rioters posed.  It’s dangerous and needs to be stopped.

That's why, in partnership with Police Unions Exposed, we're calling for Catanzara to be removed immediately. The longer Catanzara remains in power, serving as the mouthpiece for 12,000 Chicago police officers, the more these pro-Trump white supremacists will feel empowered in their violent actions — in Illinois, in D.C., and across the country.

Just last month, Catanzara was placed under investigative review. He is now facing possible firing over racist and offensive posts on social media, including a post that read, “savages they all deserve a bullet,” when referring to Muslim people. Along with these comments, he’s also posted similarly bigoted remarks about women and liberals and about former First Lady Michelle Obama. The Police Board is still considering whether or not to fire Catanzara over these atrocious remarks -- this is a board composed of civilians who are appointed by Mayor Lightfoot. They have the power to fire Catanzara at any point.

Mayor Lightfoot has made several public statements in opposition to Catanzara’s comments. In her most recent post on Twitter, she called on him to resign and pushed back against the FOP’s attempt to walk-back Catanzara’s defense of the attack on the U.S. Capitol. But this isn’t enough. Mayor Lightfoot has the power to put pressure on the Police Board to ensure Catanzara is stripped of his title, and no longer at the helm of the police union.

When law enforcement signals to right-wing militias and white supremacists that they’re on the same side, it encourages more serious acts of violence and sends the message that they may get away with it.

Last year, we saw how dangerous statements from police union leaders escalated violence in Kenosha, Portland, and elsewhere, with tragic results. The longer Catanzara remains in power, serving as the mouthpiece for 12,000 Chicago police officers, the more these pro-Trump white supremacists will feel empowered in their violent actions — in Illinois, in D.C., and across the country

John Catanzara, the leader of Chicago’s police union, is defending the violent attack on the US Capitol by Trump supporters and white supremacists, dismissing it as an “inconvenience,” saying “they’re entitled to voice their frustration,” lying about there being no violence or destruction of property, and most importantly, actively betraying his oath, as a sworn police officer, to defend the US Constitution. Catanzara must go.

We call on you to use your power to publicly condemn him and force his immediate firing from the Chicago Police Department, and his removal as leader of the Chicago Fraternal Order of Police.