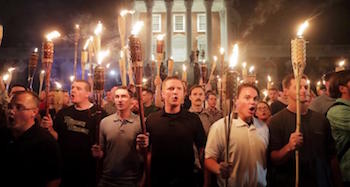 After the Charlottesville, Virginia City Council voted to remove a statue of Confederate General, Robert E. Lee; white nationalists stormed the city, brandishing torches and Nazi flags and terrorizing Black students and faculty on the University. Anti-racist protesters gathered too, eventually coming together in such great numbers that cowardly white supremacists fled the premises. As protesters celebrated their successful demonstration against racism and terror, a car mowed down the crowd, injuring 17 people and murdering three.

These violent acts of intimidation and murder are clearly acts of domestic terrorism. But disturbingly, no major media outlets have named them as such--instead choosing to use words like “rally or demonstration.” This is unacceptable. In a political climate where Donald Trump seeks to deprioritize white nationalist groups on the terror watch list although hate crimes have reached a level not seen since 9/11, news media must resist the sterilization of white terrorism and reaffirm their commitment to integral journalism.

This is the letter we'll send to news outlets:

I am writing to ask you to refer to the acts of violence and intimidation of white nationalists as "domestic terrorism." The media must be accountable for their power to dictate the language we use and the ideas that we discuss. Since Trump has been elected President of the United States, news outlets like yourself have glowingly embraced their new status as arbiters of truth in a climate of alternative facts. But by continuing to soften acts of terror, network news is choosing a side. Instead of honoring cherished journalistic values of transparency and honesty, you are choosing to feed into the white supremacist PR machine.