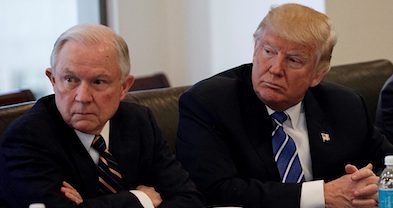 In less than two weeks, Donald Trump has begun forming a cabinet- the likes of which we have only seen hidden behind white hoods. And now he has picked known racist, Jeff Sessions, to ascend to the highest legal position in the land. Trump’s would-be Attorney General pick has an extensive track record of hate- he has called a Black federal prosecutor “boy,” falsely prosecuted Black political activists, and made offhand jokes about his support of the Klu Klux Klan. Racism is not a joke. We cannot let our halls of justice be cloaked with white supremacy.

Here’s one way we can stop Trump’s New Klan from rising to power. Before Sessions can take control and become the head of the Department of Justice, he must be confirmed by the Senate- a process he knows well. Thirty years ago, a Republican-controlled Senate Judiciary Committee rejected Sessions for a federal judgeship. Their reason? Session’s racially charged comments and actions were too much. We can and must stop his nomination again.

To the Senate Judiciary Committee:

“No” to racism means “no” to Jeff Sessions. Do not confirm his nomination for Attorney General.