Stand with Justice for Greenwood! | ColorOfChange.org

Stand with Justice for Greenwood!

Stand with Justice for Greenwood! 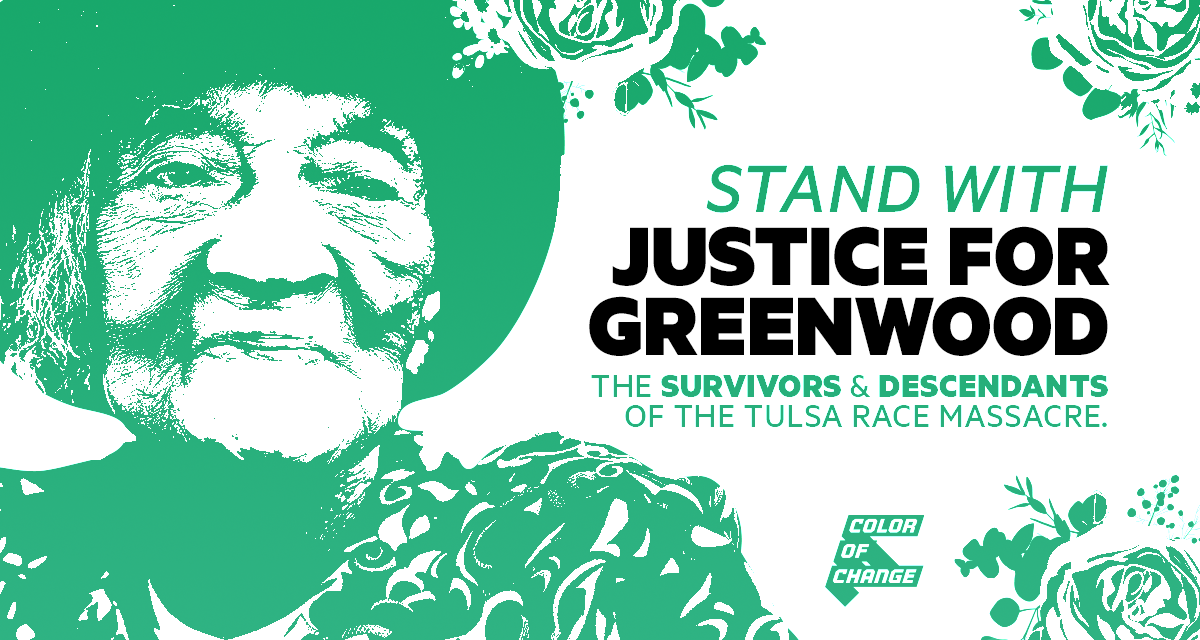 Tulsa’s government has repeatedly denied reparations to the descendants and survivors of the Tulsa Race Massacre. Now, for the 100th anniversary, the mayor is co-opting their movement for justice by instead promoting the 1921 Tulsa Race Riot Centennial Commission—a group that has excluded and refused to meet with survivor Mother Randle, yet claim to be working in honor of her. While the Centennial Commission received $30 million in funding for the celebration and stands to gain more in revenue from the upcoming Greenwood Rising Museum, Mother Randle still lives in poverty at age 106. This is simply theft—theft of her legacy, image, and pain. We cannot allow the city leaders to champion their revisionist history and continue to exploit the very people affected by it.

Over the years, the government resurrected Greenwood into a whitewashed commercial district that is primarily owned by wealthy white developers while pricing Tulsa’s Black entrepreneurs out of the area. In rebuilding the district, city leaders implemented “race-neutral” policies, which benefited everyone but Tulsa’s Black entrepreneurs, who should be the primary owners of that land. Now the 1921 Tulsa Race Riot Centennial Commission is using the anniversary of the massacre as another opportunity to profit from the pain of Black people. We cannot allow city leaders to continue to erase Greenwood’s Black community.

Right now, media outlets are claiming that Tulsa is “leading America’s journey to racial healing.” We must make the full truth known in order to foster reparative justice for the survivors, the descendants, and Tulsa’s current Black community. We cannot allow the mayor and the 1921 Tulsa Race Riot Centennial Commission to exploit the history of Black Wall Street and the massacre of Black men, women, and children. We stand in solidarity with the Justice for Greenwood organizers and ask that you stand with us!

Sign the petition: Demand that the Centennial Commission and City of Tulsa give 80% of the $30 million raised to the survivors and descendants of the Tulsa Race Massacre before the 100th anniversary!

The centennial celebration should be about honoring the legacy of Black Wall Street, both before and after the Tulsa Race Massacre of 1921, celebrating the ingenuity of the Black people who created that thriving community—in the midst of Jim Crow segregation—and continuing their legacy of Black excellence. The spirit of Black Wall Street should be revived. There are real steps that you and others city leaders can take to forge a path of truth and reconciliation, starting with re-allocating 80% of the funding for the Centennial Commission to the survivors and descendants and removing barriers to ensure that Tulsa’s Black residents are an integral part of the revitalized Greenwood District.