Tell Atlanta City Council to vote NO on “Cop City”

Tell Atlanta City Council to vote NO on “Cop City” 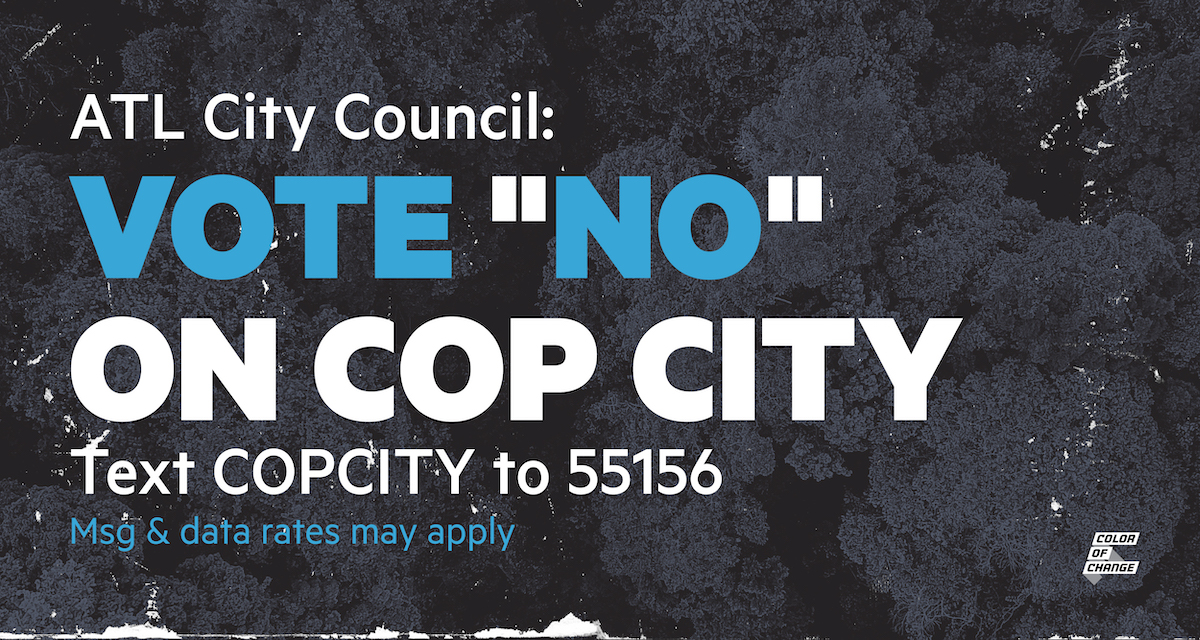 The Atlanta Police Foundation, backed by their corporate donors and members of City Council, are trying to turn a forest in Southeast Atlanta into a massive police training facility nicknamed “Cop City.”

The Old Atlanta Prison Farm is a former prison labor camp that was active until the 1970s. Now, the Atlanta Police Foundation is attempting to turn this vital green space, forest, and wetlands into a massive training facility for cops — encompassing a land area larger than 85 NFL football fields.

Clearcutting these wetlands will have devastating effects on Atlanta’s environment, including worsened air quality and flooding in the predominantly Black neighborhoods in Southeast Atlanta. Furthermore, APD’s current and future use of chemical weapons and its broader militarized training program will poison the soil and endanger Atlantans with multiple forms of state violence.

The proposed facility includes shooting ranges, spaces to use militarized equipment, and a "mock city" complete with buildings and roads to allow Atlanta Police to practice urban warfare tactics.

Make no mistake: "Cop City" is an environmental nightmare AND a threat to Black lives. We have until September 7 to demand all Atlanta City Council Members vote NO on the development of the "Cop City" training facility. Add your name to demand accountability now.

As communities and advocates demand investments in what actually keeps Black people safe, healthy, and housed, police foundations undermine those efforts, increase police budgets, and support militarization. Police foundations are a backchannel to funnel millions of dollars to police departments without politicians or the public knowing. Atlanta Police Foundation's $90 million "Cop City" is the perfect example of the massive, militarized, and corporate-funded projects police foundations prop up behind closed doors and outside of public oversight.

Let’s be clear: The Atlanta Police Foundation is a private organization that serves as the Atlanta Police Department’s secret piggy bank. The police foundation gives APD money, equipment, and a blank check to terrorize Black Atlantans.

The Atlanta Police Foundation has already funded over 12,000 surveillance cameras to monitor over-policed Black Atlantans, making Atlanta the most surveilled city in the United States. This program, called “Operation Shield,” has allowed the police department to monitor and surveil Black people every second of the day.

Sign the petition: The City Council must say NO to Cop City and YES to the community investments that actually keep Black Atlantans safe.

Below is the letter we’ll be sending to Atlanta's City Council:

We are calling on you to vote "NO" on September 7 regarding the development of the Atlanta Police training facility in Southeast Atlanta (a.k.a. "Cop City").

If built, the Atlanta Police Foundation-sponsored training facility would be one of the largest police training facilities in the country. This massive amount of land in Southeast Atlanta should be protected. Instead of dedicating more city resources to violent policing, the City Council should prioritize and invest in public services that actually serve the people of Atlanta, like addressing the climate crisis, funding housing, schools, hospitals, mental health care, and violence prevention. The City Council must also demand transparency and accountability from the Atlanta Police Foundation and its funders.

"Cop City" will only further the Atlanta Police Department’s ability to wreak havoc on and harm Black communities, and entrench the Atlanta Police Foundation's power to funnel tens of millions of private dollars into policing. We need safety, not more violent policing.

On September 7, stand with Black Atlantans, Atlanta neighborhoods, Atlanta activists, and your constituents. Vote "NO" on Cop City.