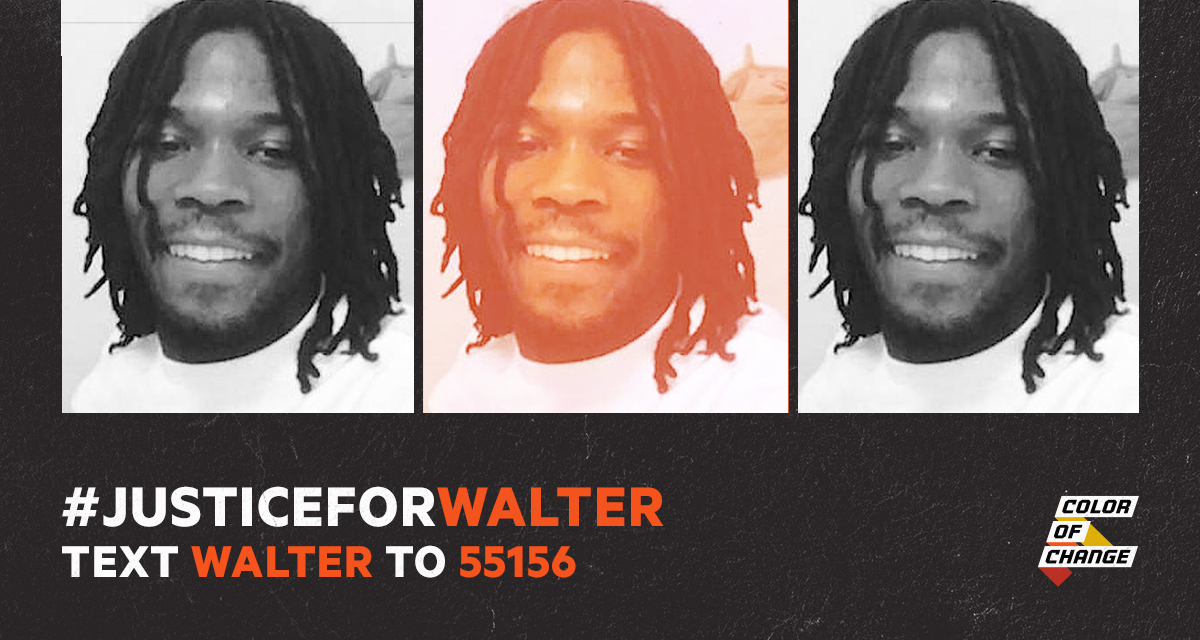 Walter Wallace, Jr. should be alive right now. He deserved care, not a death sentence.

Here’s what we know: Walter, a 27-year-old father, had bipolar disorder and was experiencing a mental health crisis on October 26. Walter’s brother did what most would do if our loved one were in crisis — he called 911 to request an ambulance.

Unfortunately, two Philadelphia police officers arrived on the scene before medical professionals or an ambulance — and tragically, the rest of the story is one we know all too well. Instead of de-escalating the situation or providing Walter with the mental health care he so desperately needed, instead of listening to the heartbreaking pleas of Walter’s mother, the responding officers barked demands at Walter and aimed their guns at him.

Newly-released bodycam footage shows what happened next: The two police officers fired approximately seven rounds EACH, hitting Walter in his shoulder and chest. Walter fell to the ground and was pronounced dead hours later. Philadelphia Police murdered Walter Wallace in the street, in broad daylight, in front of his mother.

Walter deserved care, not a death sentence — and we are sick and tired of watching Black people be murdered by police. Add your name right now to demand Philadelphia city officials terminate these killer cops IMMEDIATELY, reject the polices demands for additional funds, and ensure medical professionals, not cops, respond to medical calls.

Walter Wallace was a father, a twin brother, and a son. He was expecting to welcome a baby with his wife, Dominique. He was living with bipolar disorder. He had dreams. None of that mattered to the cops who killed Walter. Philadelphia police didn’t see an expectant father at a low point during a particularly difficult time. They saw a threat to “neutralize” — a man guilty of being Black in America.

Walter’s life — his hopes and his fears, his dreams and his future — were cut short. With 14 shots, two police officers reduced Walter’s life to a hashtag — another name on a seemingly endless list of Black people slain by police this year.

The two cops who murdered Walter have been taken off street duty as authorities investigate. But it doesn’t take an investigation to show that these officers are a threat to Black people in Philadelphia. They must be fired immediately. And to end this cycle of needless violence and to protect ALL Black lives, the city of Philadelphia must change how it responds to mental health calls.

We have been here before. In September, Color Of Change launched a campaign demanding justice for Daniel Prude — an unarmed Black man in Rochester, NY who was murdered by police responding to a mental health call.

Make no mistake: From Philadelphia to Rochester, Minneapolis to Los Angeles, police are not equipped to respond to mental health crises. Police are NOT equipped to keep Black, Brown, and Indigenous people safe. And police should be held accountable after killing someone, not rewarded with more resources.

Stand with Color Of Change, Amistad Law Project, Reclaim Philadelphia, and Philly We Rise to call for the immediate termination of the two police officers who brutally murdered Walter Wallace. Add your name to demand that Philadelphia requires trained medical and mental health professionals as first responders to medical calls, and refuse requests for additional police funds.

Below is the letter we will send to Philadelphia city officials and council members:

“I'm standing with Color Of Change to demand justice for Walter Wallace, Jr., who was murdered by two Philadelphia police officers on Monday, October 26. I am sick and tired of watching Black people be murdered by police, and you have the power to end this cycle of police violence in Philadelphia.

Walter Wallace was a father, a twin brother, and a son. He and his wife Dominique were expecting a child this week. Now, due to the actions of two racist Philadelphia cops who are still on the police force, Walter’s family is planning his funeral.

We are standing with the Amistad Law Project, Reclaim Philadelphia, and Philly We Rise to demand justice and call on you to take action immediately:

Walter Wallace needed care, not a public execution. Now, Walter Wallace and his family deserve justice. You must do everything in your power to make sure that what happened to Walter never happens again in Philadelphia.

Empty rhetoric and the promise of investigations aren't enough. Philadelphia is in desperate need of meaningful action and visionary leadership that meets the gravity of this moment. If you claim to stand with Black lives, defend Black people. Take real action to protect Black lives and demand justice for Black Philadelphians like Walter Wallace, Jr., and his family.

Firing the killer cops who took Walter’s life and changing how the city responds to mental health calls are important first steps. The eyes of the nation are on you. I am calling on you to step up and lead for your city — to take action to defend Black people in Philadelphia.