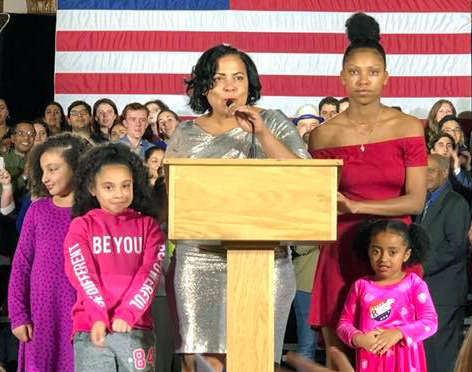 Rachel Rollins just made history in becoming Suffolk County's first ever Black woman District Attorney--but before she was even sworn in the National Police Association (NPA) filed a baseless complaint against her with the Massachusetts Board of Bar Overseers and Office of Bar Counsel. They allege that her bold and transformative platform to end mass incarceration in and of itself makes her unfit to serve as DA--it’s a load of crap. If the Board decides to revoke her license to practice law, she won’t be able to serve in office and enact crucial changes to the criminal legal system like declining to prosecute petty offenses, eliminating cash bail, and reducing racial disparities in the system.

District Attorneys who are fighting to end mass incarceration are being viciously targeted by police funded groups--and we have to make sure they can't take justice out of the hands of the people who voted these champions into office. DA Rollins isn’t alone, district attorneys who were elected to end mass incarceration are facing challenges from police backed groups across the country. Larry Krasner in Philadelphia and Wesley Bell in St. Louis are also facing organized opposition. Black communities and our allies have built a movement to replace the worst prosecutors with leaders who want to change the system from the inside out. Just like every other movement that has built power for Black people, this movement is being met with anti-Blackness, right wing resistance, and dirty tactics intended to keep our communities trapped under the leadership of those who want to see our people in cages. These groups operate in the shadows to try to undermine elected district attorneys and aren’t accountable to us. That’s why it’s so important for the voters to continue to pull together and use our collective voice in support of the changes we need in our communities.

Tell the Massachusetts Board of Bar Overseers and Office of the Bar Counsel to dismiss the complaint against District Attorney Rollins.

Below is the letter we will send to the Massachusetts Board of Bar Overseers and Office of the Bar Counsel:

Dear Board of Bar Overseers and Office of the Bar Counsel,

Please decline to take action against newly elected Suffolk County District Attorney Rachel Rollins in response to a complaint filed by the National Police Association. The allegations made in the complaint filed are completely baseless and serve a clear agenda to undermine a prosecutor elected with a mandate to address mass incarceration.

A prominent theme of the complaint is that declining to prosecute certain crimes is a threat to public safety. NPA is asking the Board and Office of Bar Counsel to discipline DA Rollins on the basis of her policy positions, specifically declining to prosecute low-level crimes and crimes of desperation and survival. The Board and Office of Bar Counsel are tasked with overseeing ethical violations and the complaint does not make a compelling case that DA Rollins has violated any ethical rules before even swearing in.

This absurd complaint is driven by a "tough on crime" politics that recent history has shown leads to the unwarranted criminalization of Black and brown people. We know that providing people with services, not sentences reduces crime and increases safety for the entire community. It is well within DA Rollins role as district attorney to use her discretion in the interest of justice. Please let her do her job and dismiss this complaint.