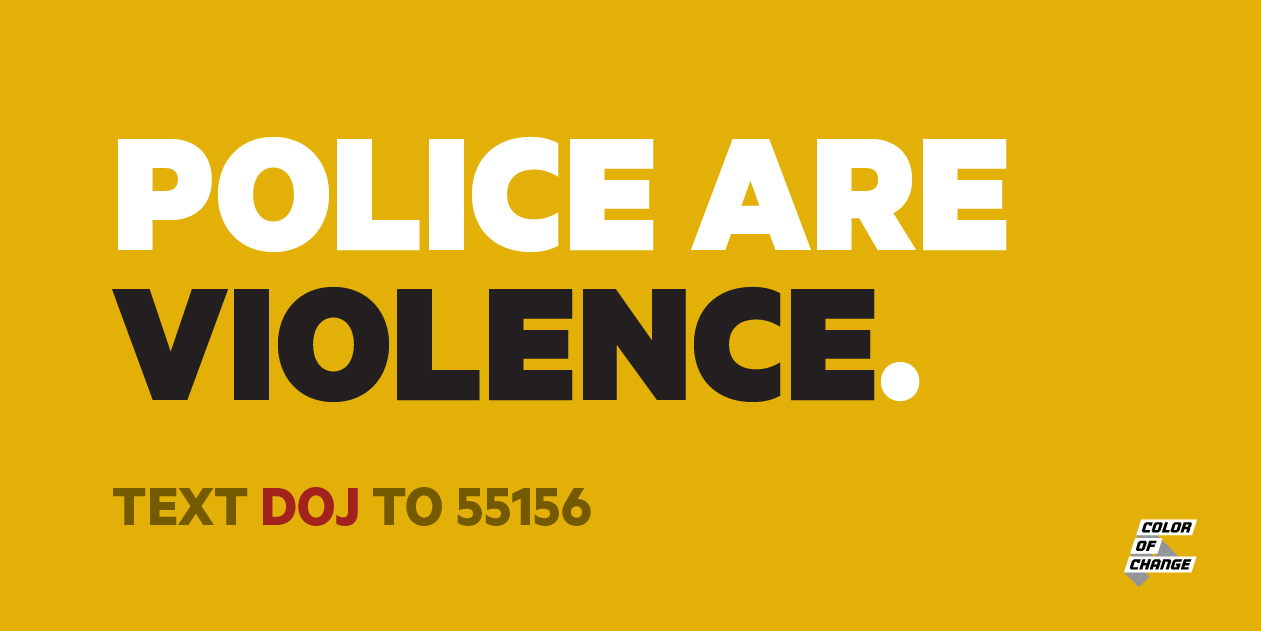 The Justice Department is finally going to investigate the Louisville Metro Police Department for the murder of Breonna Taylor. Attorney General Merrick Garland made the announcement on Monday, April 26 — one week after launching an investigation into Minneapolis Police.

We're seeing this movement because people like you are rising up to fight for Black lives. But the work's not done.

Add your name: Demand a Dept. of Justice investigation into police departments across the country that threaten Black people.

On Wednesday, April 21, Attorney General Merrick Garland announced that the DOJ is opening a sweeping investigation into policing practices in Minneapolis.

We're encouraged by this action, but we know that Minneapolis is not alone. We have to keep up the pressure. Since the Chauvin trial began on March 29, police in the U.S. have killed more than 3 people every single day. Police in Columbus, OH murdered a young Black girl named Ma'Khia Bryant just minutes after the Chauvin verdict was announced.

The state-sanctioned murder of Black people by police must end. This is a national crisis, and we have to keep fighting to dismantle systems of oppression that threaten Black lives.

George Floyd should be alive. Instead, he was murdered at the hands of the Minneapolis Police Department (MPD). Almost one year later, a jury found Derek Chauvin GUILTY of all counts for the murder of George Floyd.

Make no mistake: This conviction cannot bring back George Floyd. One guilty verdict for one police officer is not enough.

This trial was about accountability, NOT justice. The fact is, MPD has a deep history of anti-Black violence — but Minneapolis is not alone.

Since the Chauvin trial began on March 29, police in the U.S. have killed more than 3 people every single day. From Minneapolis to Louisville, KY to Rochester, NY, police are a direct threat to Black people and communities. Police fail to keep us safe, and policing is a national public health crisis.

That’s why we’re calling on the U.S. Department of Justice (DOJ) to immediately investigate the Minneapolis Police and other police departments that threaten Black lives — for civil rights violations, and a pattern and practice of inappropriate use of force, particularly targeting Black people. Add your name now.

We know that MPD is not unique. Last March, in response to a mental health call, Rochester NY Police murdered Daniel Prude in the street. In recent months, RPD officers have maced Black children and murdered Tyshon Jones — another Black man experiencing a mental health crisis.

We've been here before. Police violence continues to threaten Black lives, and the war on Black communities must end.

It’s up to us to make sure President Biden keeps his promise to Black voters and uses the power of his administration to hold police accountable for their actions — in Minneapolis, in Lousiville, in Rochester, in your city, and across the country. Add your name now.

Police brutality is a systemic issue. To end this state-sanctioned war on Black people, we need systemic change — a roadmap away from policing that threatens Black lives. A DOJ investigation with a community safety action plan for Minneapolis, Rochester, and Louisville is an important step in the right direction.

We demand safety, and we demand action. Sign our petition to demand an immediate DOJ investigation into the Minneapolis Police Department, Rochester Police Department, and other police departments that continue to threaten and kill Black people. We need immediate, meaningful action at the federal level to protect and defend Black lives.

Below is the letter we will send to DOJ:

I'm standing with Color Of Change to defend Black lives and demand justice. Police departments in Minnesota and across the country continue to threaten Black lives.
I am encouraged by AG Garland's recent decision to investigate the Minneapolis Police Department (MPD) and Louisville Metro Police Department (LMPD). I'm calling on the DOJ to also immediately launch pattern-or-practice investigations into the Rochester NY Police Department, Columbus Police Department, and other police forces that put Black people in danger. These police departments have a history of civil rights violations, as well as a pattern and practice of inappropriate use of force, particularly targeting Black people.
Last year, the world watched in horror as Derek Chauvin and other MPD officers murdered George Floyd in the street. Minneapolis Police has a deep, well-documented history of anti-Black violence — but Minneapolis is not alone.
In response to a mental health call, Rochester NY Police murdered Daniel Prude in the street last March. In recent months, RPD officers have maced children and murdered Tyshon Jones — another Black man experiencing a mental health crisis.
We've heard this story time and time again — in Minneapolis, Louisville, Columbus, Rochester, and across the country. This state-sanctioned violence against Black people must end before even one more life is lost.
After Derek Chauvin was found guilty, President Biden reaffirmed his commitment to “root out unconstitutional policing and reform our criminal justice system." He also stated that he has complete confidence in Attorney General Garland's commitment to this effort.
The DOJ must immediately launch investigations into systemic racism in policing, and issue court-monitored consent decrees to end anti-Black violence inflicted by local police departments across the country.
Although we will continue to demand legislation that protects Black lives, we can no longer wait on Congress to act. Open a Dept. of Justice pattern-or-practice investigation now.