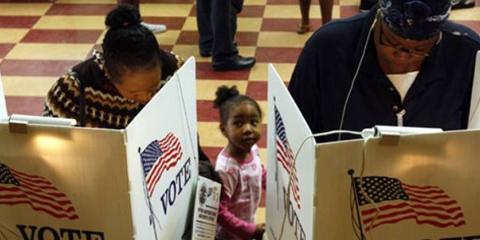 Now that Democrats have won the majority of seats in the House, they must act to fight back against the GOP’s rampant voter suppression efforts. With the full investigative power of Congress at their disposal, they can  shine a light on voter suppression across the country. The House must ensure that states are upholding their responsibility to build voting infrastructure that meets the needs of our growing, diversifying democracy and ensure that elections are carried out fairly.

This Tuesday, we witnessed some major achievements: the enfranchisement of 1.5 million non-violent felony offenders in Florida, a record number of women of color elected to Congress, and, the Democratic Party’s new control of the House of Representatives. But, before we could celebrate, we witnessed massive voter suppression and intimidation. Conditions like people waiting in long lines for up to 4 hours to vote, voting machines breaking down, and polling locations opening late are not accidents. They are the products of decades of Republican-led suppression tactics aimed at voters of color.

Crumbling voter infrastructure is intentionally placed in majority Black precincts as a way to keep Black people from voting and kill Black political power. It’s no different from the literacy tests, poll taxes, and intimidation Black voters faced in the Jim Crow era. We’re calling on Democrats in the House to use their new majority to launch investigations into voter suppression and subpoena Secretaries of State, campaign staffers, and poll workers to get to the bottom of this subversion of democracy.

Over the years we have seen Republican lawmakers at the state level implement more stringent restrictions on voting access targeting Black communities and other communities of color. From outdated and malfunctioning voting machines, to strict voter ID laws, to voter roll purges targeting Black voters, the GOP has been blatant in their pursuit to crush Black political power.

These attempts harken back to the days of Jim Crow where Black people had to pass literacy test, pay poll taxes, and deal with other forms of intimidation at the ballot box. This is a subversion of democracy and a violation of constitutional rights.

We're calling on you to use your investigative power to hold hearings on widespread voter suppression and to subpoena Secretaries of State, poll workers, and campaign workers to get to the bottom of this.