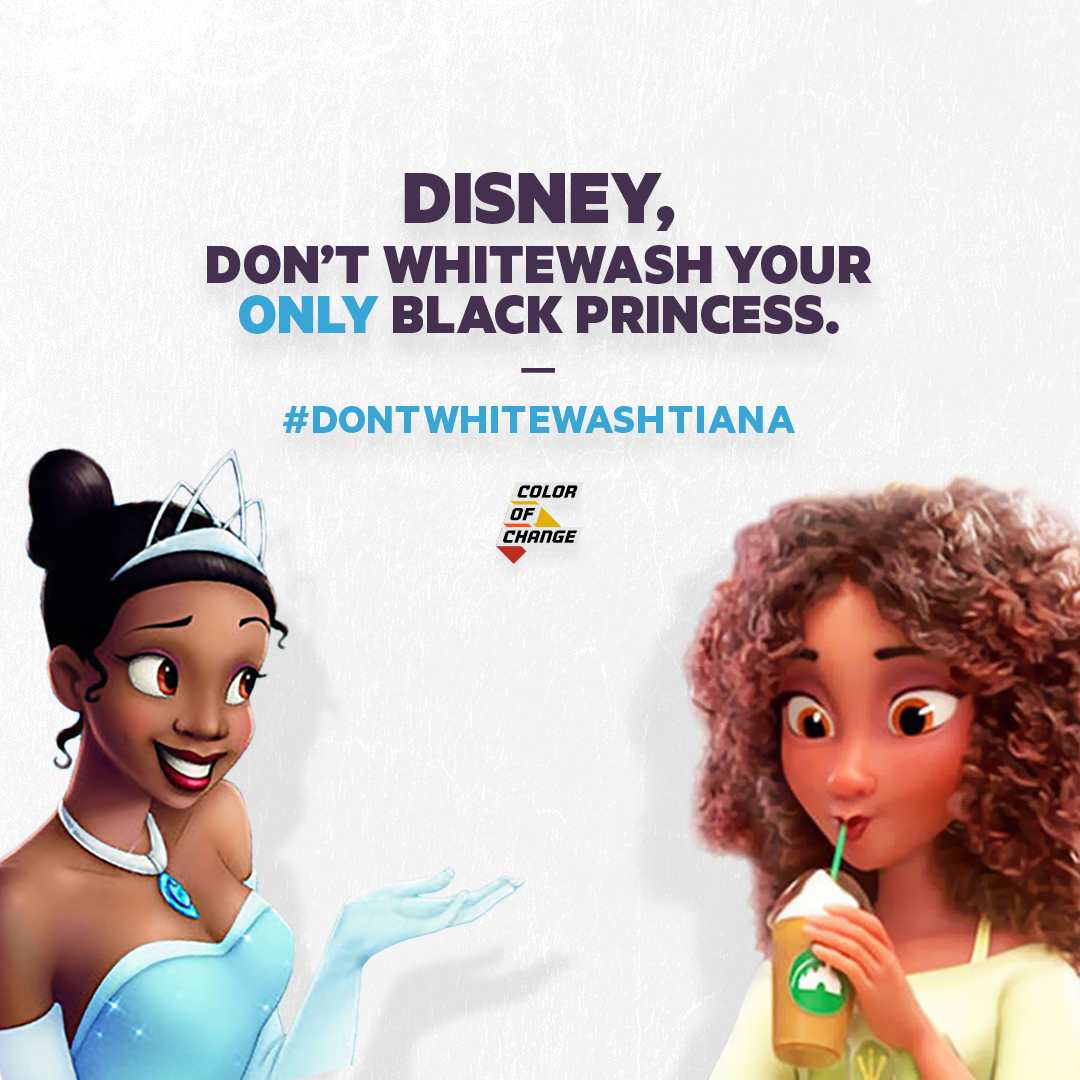 Disney is trying it.

Walt Disney Animation Studios released a second set of official images for their upcoming film Ralph Breaks the Internet: Wreck-It Ralph 2. One of the images features all the Disney princesses created up to now. There’s just one problem: Princess Tiana looks...different. Originally depicted in The Princess and the Frog as a young, Black New Orleans woman, in these images, Princess Tiana looks nothing like her original character. She is shown here with Eurocentric features  a slimmer nose, loose curly hair and a significantly lighter skin tone than her previous depictions.

This is unacceptable. Yet again, Disney made the choice to whitewash an image that represents us. They’ve totally removed and replaced Princess Tiana’s full lips, dark skin and kinky hair. By doing so, they are showing us that they don’t care about reflecting the diversity of the Black community. We must hold Disney accountable for whitewashing their only Black princess and demand that they return Princess Tiana to her original CGI version.

Princess Tiana is a pivotal Disney character. She was introduced at a time when there were few other princesses of color. Although she wasn’t created until 2009, Princess Tiana was Disney’s first — and only — Black princess. Young Black girls were elated see a Disney princess who looked like them, and have been able to feel their culture and their racial identity are more valued in society as a result. Princess Tiana’s existence also has been able to help young girls positively internalize their racial identity, fundamentally shifting the way they see themselves. It’s important that a company as expansive and influential as Disney represent the variety of shades, shapes and sizes of Black people — not set a standard that only certain images of Black people are valued and accepted.

This is not unique. Disney has previously created problematic representations of people of color in their films and TV shows. Just this year, Disney said it was “having a hard time finding people of color” to cast in the live-action version of Aladdin, and admitted to “darkening the skin tones of white actors cast as extras.” Even within upcoming Ralph Breaks The Internet: Wreck-It Ralph 2, it is clear that Disney did not only choose to change Princess Tiana’s features to appear more Eurocentric, they also chose to give more European features to their only Native American princess, Pocahontas. Whether they are Black characters or other characters of color, Disney’s continual whitewashing of characters sends a message to children and adults alike that Eurocentric features are considered more acceptable.

Disney seems to be focused on whitewashing their Black characters and characters of color. But, in doing so, they’re alienating some of their most dedicated fans. Since her creation, Princess Tiana has been an extraordinarily powerful depiction of a Black woman triumphing over the many obstacles thrown at her to accomplish her dream of owning a restaurant. Princess Tiana has meant the world to those women and girls who want nothing more than to see a Disney princess who looks like them. She represents power and strength for the millions of Black people who watch her. She creates hope for Black children, inspiring those who watch her to imagine infinite opportunities for their own future.

To re-create Princess Tiana with Eurocentric features sets a harmful precedent that Black features are considered less valuable than white features. It is crucial that Princess Tiana remain the same as her original depiction. Disney must take responsibility for changing Tiana’s image and work to restore her to her original image, so that Princess Tiana may continue to inspire and connect the diverse Black people all over the world who love her.

Below is the letter we will send to Disney Animation.

The whitewashed image of Tiana you created for your new film, Ralph Breaks the Internet: Wreck-It Ralph 2, is unacceptable. You have removed Princess Tiana's full lips, wide nose, dark skin and kinky hair and replaced them with Eurocentric features — a slimmer nose, loose curly hair and significantly lighter skin tone. These characteristics are a huge part of who Princess Tiana is and what makes her beautiful. Princess Tiana is a pivotal Disney character, and it is irresponsible of you to change her appearance considering her impact on all of the young Black girls and boys who watch and love Princess Tiana.

Princess Tiana your first and only Black princess. Young Black girls and boys look up to her, and are excited to finally have a Disney princess who looks like them. They are able feel their culture and racial identity are valued in society, and better internalize their racial identity, all as a result of Princess Tiana. It’s important that a company as expansive and influential as you represent the variety of shades, shapes and sizes of Black people — not set a standard that only certain images of Black people are valued and accepted.