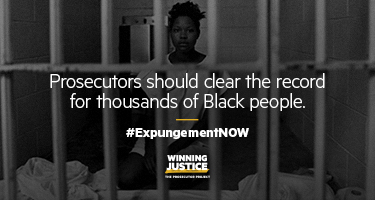 Chicago States Attorney Kim Foxx and Baltimore States Attorney Marilyn Mosby just announced, within a week of each other, that they will be taking action to clear past marijuana convictions and expunge the records of thousands of people facing extreme barriers because of past convictions--and we have a chance to push District Attorneys across the country to do the same. DAs have the power to give our people a fair chance to recover from state violence, the war on drugs, and rebuild their lives by clearing old records on a wide range of misdemeanor charges. However, most expungement processes are antiquated, costly, and inaccessible to everyday people.

The economic impact that an old criminal record can have on a Black person is undeniable. Folks with any kind of record face significant challenges in accessing housing, employment, reuniting with their children, obtaining a student loan, and participating in any government assistance program while they are re-entering their communities.

We want district attorneys to implement speedy, accessible, and thorough processes to automatically expunge the records of all who are eligible people, beyond those with marijuana convictions. Many states have several hundreds of thousands of people eligible for expungement but without a clear or easy pathway to having their record cleared. For example, estimates in Los Angeles County alone are that over 200,000 people are eligible for this kind of automatic expungement. But in order for DAs to take action, they need to hear from the people who elected them! Together we can let district attorneys know: people deserve to live their lives free of the perpetual punishment that comes with a criminal record.

We envision automatic expungement becoming a best practice for all DAs. Can you imagine how that might impact the people in your life? Let your DA know in the comments section!

Below is the letter we will send:


It is widely recognized that the war on drugs is one of the primary drivers of mass incarceration. The economic impact it has had on Black people is undeniable. Folks with criminal records face significant challenges in accessing housing, employment, reuniting with their children, obtaining a student loan, and participating in any government assistance programs while they are re-entering their homes. Additionally, many of those affected have plead guilty despite their innocence just to avoid jail time. Over the years this has lead to the wrongful convictions of too many people who are impacted for the rest of their lives. There should be no eternal punishment, especially without crime.

The injustice is clear. That’s why so many district attorneys are using the power inherent to their position to give our people a fair chance to recover from state violence, the war on drugs, and rebuild their lives. However, most expungement processes are antiquated, costly, and inaccessible.

If you were to commit to taking action on automatic expungement it would have a huge impact for the people of your community.