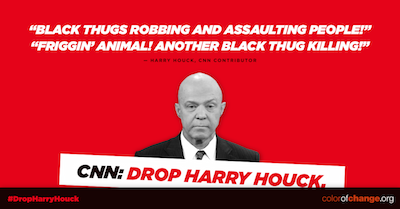 On CNN's New Day, Harry Houck went on national television and said Terence Crutcher is to blame for his own death and that any outrage over Terence's murder is just part of "the War on Police." Harry Houck has a long record of victim blaming Black people killed by police Sandra Bland and Philando Castile, but his latest on-air racism just reached another level.

Houck is repeatedly feeding the racist rhetoric that drives the attitudes and stereotypes that cause police officers to regularly commit brutal acts of violence against people like Terence Crutcher.

We are sick of CNN contributor and former NYPD detective Harry Houck’s one-man crusade against Black victims of law enforcement violence. Houck’s blind support of police abuse and injustice is dangerous. It drives the attitudes and stereotypes that lead police officers to regularly commit brutal acts of violence directed towards Black folks.

Houck's recent attacks on Black victims of police violence - insinuating that Sandra Bland is responsible for her own assault and death at the hands of the police - are unacceptable. And his comments on New Day that Black people are "prone to criminality" are dangerous and reinforce the racial bias that causes police to kill Black people like Alton Sterling and Philando Castile.

Houck has been readily granted a national platform on CNN and has used it to deflect attention away from the crimes committed by police. Often times, his outrageous rhetoric goes unchecked by the hosts of the shows he appears on. Meanwhile, the voices of families and experts on the history of racist policing are consistently dismissed, challenged by commentators or left out of the mainstream media narrative.

Houck is a key part of a media ecosystem that refuses to examine police abuse and the publicly condoned use of illegal force against Black people. The stakes are way too high to tolerate Harry Houck’s dangerous message any longer. This country has a racially discriminatory policing epidemic, and we need media contributors who can speak to that injustice, not peddle racist narratives and criminalize Black lives.

We demand CNN replace Harry Houck with someone capable of discussing the state of racism and prejudiced policing.