This LAPD Officer should be fired NOW for shooting his gun at children. | ColorOfChange.org

This LAPD Officer should be fired NOW for shooting his gun at children.

This LAPD Officer should be fired NOW for shooting his gun at children. 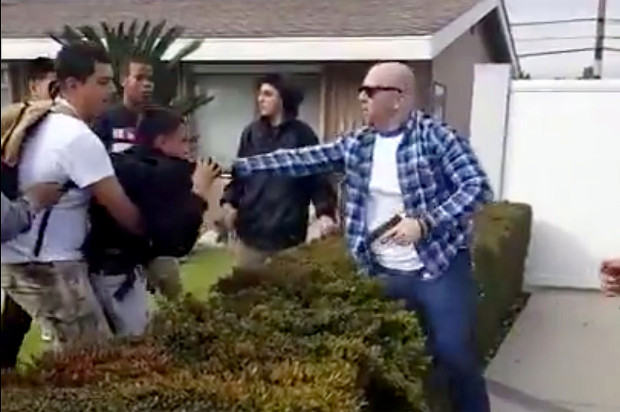 In February 2017 off-duty LAPD Officer threatened a group of teenagers in Anaheim with a gun-- because they were walking across a lawn. Protests erupted for days and we still haven't seen justice. But, we're close and momentum is building.

The Los Angeles Police Commission recently released the findings of an internal investigation-- LAPD Officer Kevin Ferguson acted in violation of department policy when he escalated the encounter with a group of teenagers in Anaheim and ultimately chose to discharge his weapon. The video of a grown man physically assaulting a 13-year-old boy after calling a little girl a "cunt" is beyond upsetting.

Orange County District Attorney Tony Rackauckas has declined to press charges. However, in a memo, prosecutors called Ferguson’s actions "unwise, immature and flat-out horrible." Ferguson fired a gun, while forcefully grabbing a child. He must be held accountable.

Police should not be exempt from their wrongdoing, yet time and time again the decisions of officials suggest that police are above the law. And even on the rare occasion when they are dismissed from their posts, they are handed hefty severance checks that reward their violent and sometimes fatal misconduct.

Police Chief Beck has been critical of Ferguson’s conduct. The commission’s findings provide him with enough justification to take action. Let's make sure he does so.

We want justice for these children. And that doesn’t include a fat severance check for a rogue, vigilante police officer. The people will likely pay for his mistakes in a civil case filed by the teenaged survivor, we shouldn’t pay to set him up for a comfortable retirement too.

Below is the petition we will send to LAPD Police Chief Charlie Beck:

LAPD Officer Kevin Ferguson is a danger to our children. The Los Angeles Police Commission recently found him in violation of department policy when he fired his gun at teenagers while off duty. We are outraged that Orange County District Attorney Tony Rackauckas has chosen not to prosecute. You have the power to fire him and we are calling on you to do so. We expect also that he receive no severance pay because he should not be rewarded for threatening children.